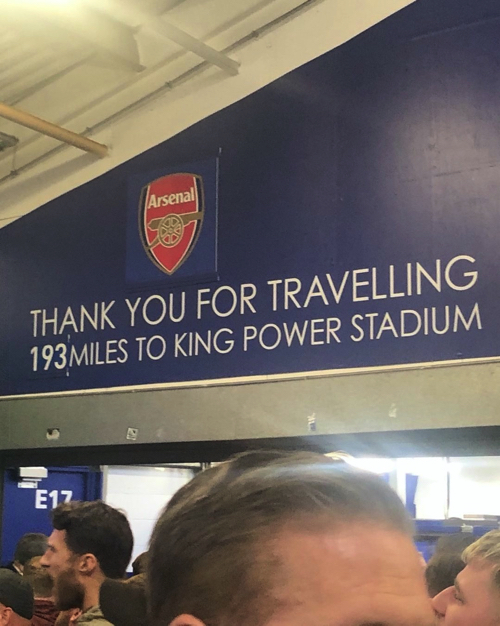 I’ve taken a while to think about that Leicester win last weekend to try and gather my thoughts on it. But I can’t help but get drawn back to what a fantastic day it was, in every aspect. I’ll come onto that shortly but as we look ahead to a very winnable home game against Watford, the importance of a win is paramount. Following this we have the international break followed by what is a very difficult winter/Christmas period. However it feels like maybe, just maybe, we’re going the right way. The wheels are turning and looking at recent performances it is simply a case of the same again from the boys.

My journey to Leicester was as always pain free, despite it being 193 miles from the Emirates (as a helpful sign told us inside) it is a touch over an hour from London on the train. And the traveling support were out in force. What looked to be a dismal day weather wise cleared over and soon my group were enjoying a few pre-match jars in a packed pub garden, drinking in the sunshine. After a short walk we were in and the noise from the away end was spectacular. The contrast between that and the silence that fell across the stadium to remember all those who have fallen in combat was sobering.

As seems to be the flavour for Arsenal at the moment, we came flying out the blocks and Leicester simply couldn’t handle it. Six minutes in, Gabriel headed home sending the away end into pandemonium. Another set piece goal from us this year and the new set piece coach must be delighted with the job he’s doing. Eleven minutes later, after a fortunate break off Lacazette and a Leicester defender, Emile Smith-Rowe found himself in the right place at the right time to sweep the ball home. Cue, once again, delirium in the away end. 2-0 up against a very good team away from home before 20 minutes. Incredible.

Of course I can’t talk about this match without mentioning the simply outstanding Ramsdale between the post. His save from the Madison free kick drew goal-like celebrations from the traveling support. His performance and sheer determination to keep a clean sheet was incredible. He was on the money every single time of asking and if Leno had a job on to retain number one, he’s got an increasingly uphill battle now. After weathering the early second half storm, Leicester never looked like scoring and the 3,000 away fans returned to London very happy indeed. It’s now a case of producing the same again.

It seems strange to think that we’re already in November and another international break is upon us. But we have one more match to get another big 3 points from to keep ourselves very much in the mix tomorrow. Watford are having a tough time in the league this season and present us with a big opportunity to take a further 3 points at home. Anything other than that after what was a monumental victory away at Leicester will be disappointing. If we play the way we did there we’ll give ourselves every chance. Same again please Arsenal.

As always I’ll see you there tomorrow. If not I know you will all be cheering the boys on wherever you find yourself.